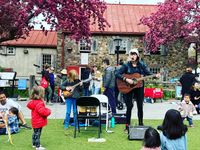 Esther & Vincent LIVE at Music in the Grove

Esther performs at Fort Greene Park's Music in the Grove Series with her son and her puppets! More info here: https://fortgreenepark.org/events/2022/7/13/music-in-the-grove-with-frank-gallo-7s8g2-shb4g-l5pxl-234ey Bio: Esther Crow is an award-winning recording artist, singer/songwriter and teacher from NYC's Upper West Side. She has released 5 albums with her band, The Electric Mess, and two albums for children: This is Thunder & Sunshine (2017, with her band Thunder & Sunshine, which won Best Children's Album from the Film Advisory Board) and her NAPPA-award winning solo album, All Together Now, produced by GRAMMY®- winning engineer, Dean Jones (2021). Her shows are an eclectic mix of original acoustic guitar songs, which she sometimes performs with her family (her husband, Dan on bass and son, Vincent on mandolin) and backing tracks of Thunder & Sunshine songs, which she sings as duets with her handmade felt puppets. She weaves comedy and kindness into each show, while encouraging kids to shake instruments and move their bodies. Many of her upbeat and educational songs also inspire environmental action. On Earth Day: Friday, 4/22, she will release her new single, Stuff!, which she hopes will encourage families to give away stuff they don't need (and buy/consume less "stuff"!). For more information: https://esthercrow.com/